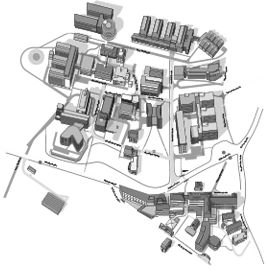 Cells employ various mechanisms to regulate flux through their metabolic network. A common mechanism is feedback regulation by metabolic intermediates or end-products in biosynthetic pathways. Such metabolic feedback can either change enzyme activity (allosteric feedback) or enzyme abundance (transcriptional feedback). In case of amino acid metabolism of Escherichia coli the majority of the pathways are regulated at both layers. Allosteric feedback is mediated by an interaction between the first enzyme of the pathway and the respective end-product. Transcriptional feedback is either mediated by a metabolite-transcription factor interaction or by transcriptional attenuation. Currently it is unclear why cells employ such a two-layer regulation strategy and when each layer is active. Here we combined CRISPR-based genetic perturbations, metabolomics and proteomics to study the function of negative feedback in amino acid biosynthesis of Escherichia coli. Our data suggest that allosteric and transcriptional feedbacks are simultaneously active, and that the interplay between both regulatory layers enforces overabundance of enzymes. Experimental and theoretical analyses show that the physiological function of overabundant enzymes is to buffer bottlenecks in metabolic pathways.